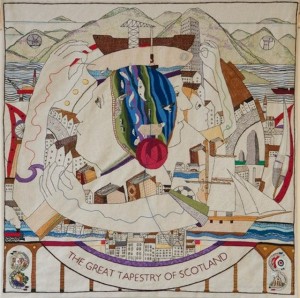 Andrew Crummy is the designer of well-known. large-scale tapestries, including The Great Tapestry of Scotland, The Mount Felix Tapestry, The Battle of Prestonpans Tapestry and The Scottish Diaspora Tapestry. These tapestries are community art projects that have involved over 2,000 stitchers globally. They have been exhibited in numerous venues including Scottish Parliament, Westminster Hall, Stirling Castle, Museums, Galleries and Community Spaces.

Andrew was trained at Duncan of Jordanstone College of Art and Glasgow School of Art. Andrew became an illustrator, based in London, working for The Observer, NME and other editorial newspapers. Andrew progressed to creating large-scale murals across the UK and beyond. While working on The Prestonpans mural programme, The Baron of Prestoungrange suggested creating a tapestry telling the story of The Battle of Prestonpans. British Writer Alexander McCall Smith saw this tapestry and commissioned Andrew to design The Great Tapestry of Scotland. This had led to Andrew creating many more tapestries, involving as many stitchers as possible.

Hundreds of thousands of visitors flock to see Andrew’s work. As a result of its popularity, The Great Tapestry of Scotland is now housed in a purpose made building in Galashiels, Scotland which opened August 26th, 2021.